The Social Costs of Innovation: Law, Society, and the Greater Good 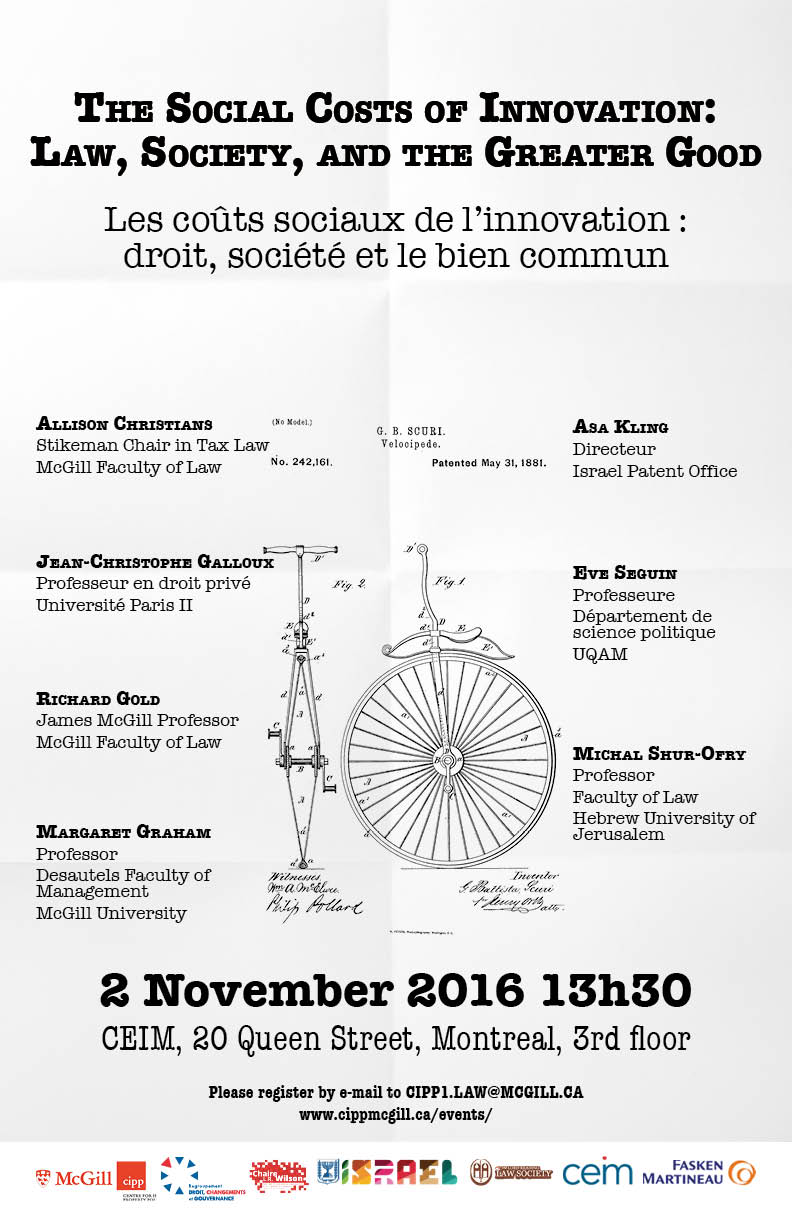 Law and innovation are usually framed in technological terms. Discussions focus on the means to incentivize technological development and regulate the use of new technologies. The assumption is that technological change is consubstantial with societal progress. As a result, lawyers and policy makers focus their efforts and critiques on whether or not law effectively supports or regulates the latest innovations. Overall, the legal dimension of innovation remains a matter for specialists, confined to the fields of intellectual property and risk regulation, those deemed most capable of understanding the needs and ambitions of scientists, engineers and managers. Jurists, it appears, must respond to technology-driven social changes with some kind of natural deference.

But the consubstantiality of technological change and societal progress is, at best, folklore. It is a romantic account of a history spoiled with profound social disruptions provoked by technology, not to mention disasters. The opposite account is no more enticing as a string of wild, unjustified public fears of new technologies. In the midst of speculation, controversy, and anxiety, lawyers and policy makers are tempted to take refuge in familiar yet problematic assumptions, such as the link between technological change and innovation, innovation and growth, growth and welfare. Law, in this narrative, remains the functional servant to technology. Never allowed to question the desirability of technological change, since it would then question innovation, growth, and welfare. To appease innovators and avoid criticism, jurists portray any interference as mere ‘law lag’, a temporary and soon-to-be-fixed condition.

Is there any other path for jurists but self-imposed technological determinism? We have long known that innovation is a social construct, that technological change is both affecting and affected by social dynamics. Economists and geographers, among others, have shown how different conditions can spur or discourage different types of innovation. Social perceptions of what constitute successful innovation can differ from one place to another, and influence both innovators and policy makers. We are neither in want of such evidence, nor uncompelled to consider the social costs of innovation: will tomorrow’s technological unemployment be tantamount to the industrial revolution’s labour abuses?

Is it only a matter of identifying the values we wish to protect from technological change, and the means to do so? Or is it that we need to confront our own assumptions about what sort of legal interventions are appropriate in such matters?

A request for CLE accreditation has been made to the Quebec Bar Association.

PLEASE NOTE: We have been informed that the pay parking at 75 Queen Street near the CEIM may be full due to construction in the area. There is another lot near the corner of Prince and Ottawa Streets, but for the same reasons, it may also have limited or no availability. As such, we strongly recommend travel by taxi or public transit.

Allison Christians is the H. Heward Stikeman Chair in the Law of Taxation at the McGill University Faculty of Law. Her research and teaching focus on national and international tax law and policy issues, with emphasis on the relationship between taxation and economic development and on the role of government and non-government institutions and actors in the creation of tax policy norms. Before entering academia, she practiced tax law at Watchell, Lipton, Rosen & Katz in New York, where she focused on the taxation of domestic and cross-border mergers and acquisitions, spin-offs, restructuring and associated issues and transactions involving private and public companies, and at Debevoise & Plimpton in New York, where she focused mainly on private equity funds.

The Social Costs of Innovation: Industrial property a controversial tool?

Margaret B.W. Graham is associate professor of strategy and organization at the Desautels Faculty of Management, McGill University. She holds MBA and PhD degrees from Harvard University. Her academic career at Harvard Business School, Boston University, and McGill has been divided between the history and practice of technology-based innovation and entrepreneurship. Her scholarly work is based on in-depth archival study, multi-year fieldwork, and long-term interaction with technology-based companies. Most recently she has published on Intellectual Property and the Professionals and the Political Economy of Corporate Research. As a member of the senior staff at Xerox Palo Alto Research Center in the 1990s she helped manage an advanced research organization focused on inventing the “office of the future”. She is a founding director of The Winthrop Group, Inc. a group of business historians and archivists that assists corporations, foundations, and other organizations to preserve and make use of their experience. Since 1990 she has served as an independent trustee and Chairman of the Governance and Nominating Committee for Pioneer Investments, based in Boston, Massachusetts and owned by the UniCredit Bank of Italy. In 2016 she was president of the Business History Conference meeting in Portland, OR.

Perspectives of an IP Regulator: Designing Innovation Instigating Policy while Applying the Letter of the Law

Mr. Asa Kling entered Office as Director of the Israel Patent Office and Commissioner of Patents, Designs and Trademarks on May 1st, 2011. Mr. Kling led several reforms in the Israel Patent Office promoting transparency and reducing bureaucracy while enhancing international collaborations. Under his guidance, the Israel Patent Office became an International Searching and Preliminary Examination Authority under the Patent Cooperation Treaty in June 2012. Mr. Kling earned his LL.B. from the Tel Aviv University and graduated (magna cum laude) from the lucrative Tel Aviv University, International Executive LL.M. Program in collaboration with UCLA Berkeley. Mr. Kling holds also a B.Sc. in Aerospace Engineering from the Technion – Israel Institute for Technology, Haifa. As an Attorney at Law and a Patent Attorney, he practiced commercial law as a partner in a leading intellectual property law firm focusing on patent litigation, licensing and antitrust issues.

Michal Shur-Ofry is a faculty member (senior lecturer) at the Hebrew University of Jerusalem law faculty, where she teaches several courses and seminars in the area of intellectual property law. She received her LL.B. (magna cum laude) and Ph.D. from the Hebrew University of Jerusalem and her LL.M. (merit) from University College London, as a Chevening–Sainer scholar. Michal’s research focuses on intellectual property law and innovation theory. She is also interested in the interrelations between law and networks, and her scholarship uses insights from the theory of complex systems to examine, explain and challenge various legal rules and conceptual frameworks. She has authored several articles and one book in these areas. Before joining the Hebrew University law faculty in 2013, Michal was a partner and the head of IP in a prominent law firm in Israel.